Share on
Whim  is an internationally recognized new MaaS (Mobility as a Service) app, which combines all different transportation options into one easily managed monthly paid package. The combination of public transit, taxis, rental cars, city bikes, and other soon to be available transportation options provides the next generation option for car ownership. Maas Global chose outdoor advertisement as the main media to ensure an explosive launch in Finland. As a result, the target audience was reached, the brand awareness of Whim surged, and the app downloads exceeded 45k within the first two months.

Maas Global's Whim app seeks to solve challenges facing urban commute. The first version of whim was announched at the start-up event Slush and was launched to the general public with the help of outdoor advertisement in December 2017.

OOH was chosen as the main media of the launch because the goal was to reach a wide awareness as fast as possible. In addition, out-of-home media presence provided a perfect context for Whim, which aimed to reach target audience at a time when they are actively thinking about transportation and urban commute.

The target audience was reached, and the already ambitious objectives were exceeded handily, with the app reaching over 45k dowloads within 2 months. Whim was seeking a rapid start and wide awareness for it's service, and they succeeded in acheving just that. 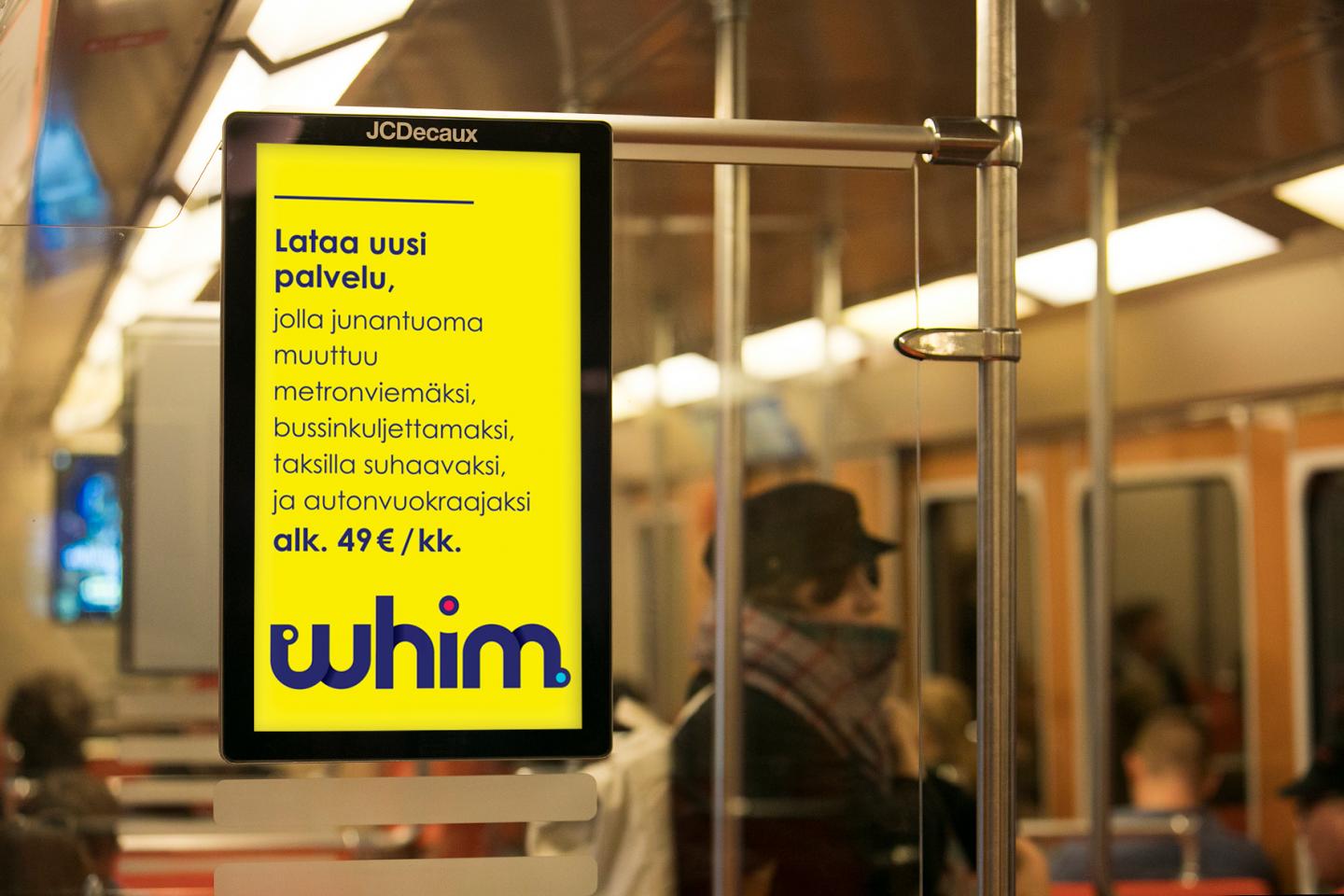 Whim became the most well known mAAS provider in one go

Whim rose to the target audience's awareness in one fell swoop and quickly became the most well known modern MaaS provider.

"This was a launch of a completely new service and brand. Focusing media budget into OOH, along with strong PR proved to be a perfect combination, quickly raising Whim to the public discussion, and consequently to metropolitan consumers' smartphones" Whim's sales & marketing director Esa-Pekka Nykänen illuminates. Whim's brand awareness grew to nearly 50% in the 18-39 y/o segment. Also, 58% of 18-74 year-olds remember seeing Whim's outdoor ads. During the first week of the launch, the interest towards the brand and app had grown in the 18-74 y/o segment to 46%.  (Source: TNS Kantar campaign measurement, 18-74 y/o, n=589)

"Its hard to optimize nothing. This is why we used OOH to build a strong wave of awareness, which we can efficiently build on with digital marketing", Nykänen notes. When choosing outdoor advertisement as the main media, its versatility and special characteristics played a key role in the selection. The launch included both traditional poster ads as well as digital outdoor advertisement. The posters were used to quickly build a wide coverage and frequency and paint the downtown area with Whim's yellow brand colours. The digital impact zones of Helsinki and metro stations were used to promote a wow-effect, increase local attention and take over the time and place. 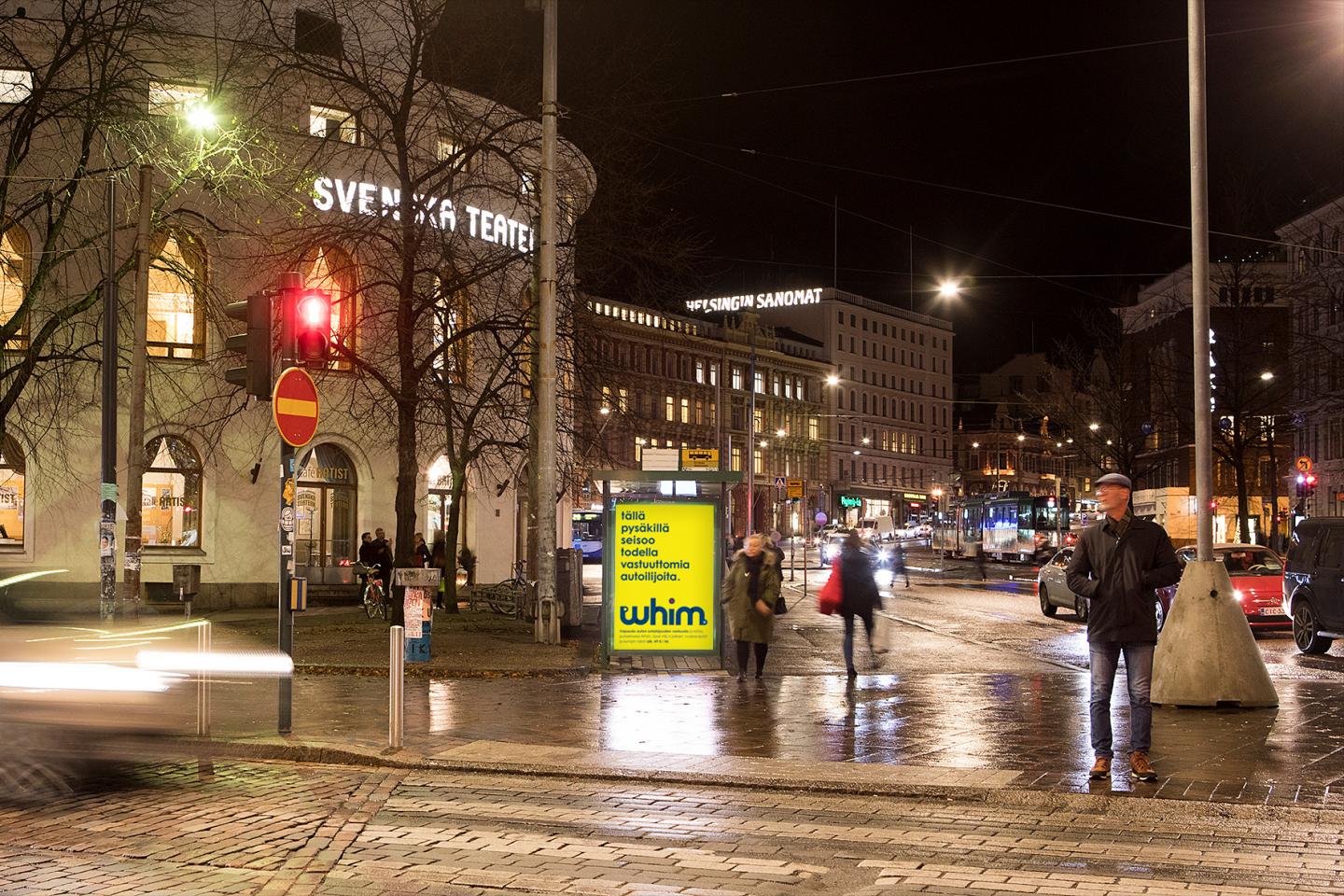 "Increasing share of smart citizens are actively considering alternatives to car ownership, and are surprisingly receptive to new alternatives. Outdoor advertisement provides a great avenue to raise interest in a context where transporation is actively considered", tells Nykänen. He continues: "lively urban environment is our common playground, so it is natural to bring the dialogue to the streets."

All stakeholders, all the way to the international backers have been pleased with how Whim was launched in Finland. It is highly likely that similar approach will be replicated in new markets, both locally and globally. Outdoor advertisement provides an opportunity to create an image of a larger brand and bring tangibility to a new product's or brand's launch. "Now this feels real!" was a common sentiment within Whim employees, when the campaign started.

Whim's launch begun in the metropolitan area, but there are big plans for expansion. During the spring, the service is looking to launch in Birmingham UK, as well as Antwerpen Belgium. Finnish expansion will next move to Turku.

Published in Case , about #Mobile, #Drive to mobile